Hi Friends
I found this interesting article on the following web page:
http://www.livingunrefined.com/2013/04/natural-ear-drops.html
I am sure you will find it helpful. Enjoy.

One of a mamma’s simple pleasures is the quiet that falls over the house between the kiddos’ bed times and momma’s bedtime. I don’t like that time to be disturbed. By anything.

Especially by the sound of a screeching toddler…

At about 11:45 last night, Little Bear (2 1/2) started screaming like a banshee. My first thought was, of course, bad dream… I ran to his room and he was sitting up in bed clutching his ear. I will concede that he’s really not ever sick and has never ever had ear troubles, so he may have been more dramatic than most kids. Either way, the sound of my baby in pain induced a bit of a panic.

… Crap. An ear ache is probably not ER worthy, although his screams are pretty intense. Can I get an OTC drop that will help? What kind of artificial meds are in those drops? …

I had to do something, but I had no idea what. There were some old homeopathic, glycerine-based ear drops in the medicine cabinet (not sure why, though), but they turned out to be entirely useless. Dude wouldn’t even let me hold a warm rag on his ear to soothe it, and I was out of ideas.

As I snuggled my still-bawling little guy, I googled like a maniac. The only remedy I could find that could be made with what I had on hand was garlic and olive oil. I had no expectation of success, but I had to do something.

Apparently, both ingredients are highly antibacterial and garlic is a crazy good anti-inflammatory.

SO, to cut to the chase, Little Bear sat on a chair in the kitchen whimpering, “muh ear, muh ear. muh ear hut” while I made “Momma’s Magic Drops” {Seriously, naming not fun things fun names somehow makes the idea less appalling to the little ones…} 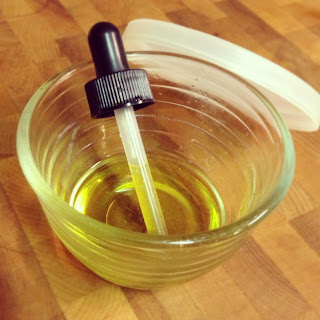 I have no pics of the actual process, because I was beyond tired and frazzled by the time we were at this point in the night…

You can store the oil in a glass container in the refrigerator. When you’re ready to use them, fill up the dropper and leave it on the counter to warm up for several minutes.

No exaggeration, within seconds of the drops going in his ear, LB was calmed down. And, by the time we were done singing the ABC’s, he was already starting to doze back off. He woke up this morning tired, but without even the slightest indication that his ears were hurting. SUCCESS!!!

For good measure, we still did drops this morning and then two more times during the day.

Today we thank all the women who knew the healing that our plants give us and used that knowledge to help and heal. #essentialherbalproducts #herbs #healing #healthisourpriority #plantkingdom